I am a PhD Candidate within the Marine Ecology Department at GEOMAR – Kiel and at Kiel University. My research interests include marine ecology, invasion biology and larval ecology.
My current research interests arebiological invasions of marine organisms, which are now frequently occurring on a global scale. Introduced species usually cause significant impacts on biological communities within their new range. Establishment of permanent populations in the new invaded areas is very important to invasive species in order to spread further. Despite the high taxonomic diversity of invading species,crustaceans are amongst the most successful invaders. Advantageous biological and physiological characteristic are thought to explain their invasion success.Benthic decapods develop through a complex life cycle comprising a series of planktonic larval stages, and a benthic juvenile to adult stage.
During my PhD study, which is funded by the DAAD, I focus on the potential impacts of the grapsid crab Hemigrapsus takanoion the invaded ecosystem, and its potential to permanently establish in the Baltic Sea. H. takanoiis a new invader to the westernBaltic Sea, and native to the western Pacific Ocean.By determining population density, size class distribution, as well as by the characterisation of the reproductive season, and by assessingthe preferred size of its prey, the blue mussel Mytilus edulis over different seasons and in relation to sex of this crab species, I want to understand its invasion success and potential for further spread. I am currently also investigating the salinity and temperature tolerance of the larvae during development to understand processes of ecological adaptation of larvae in the field. 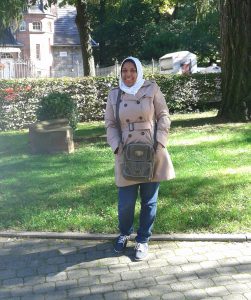