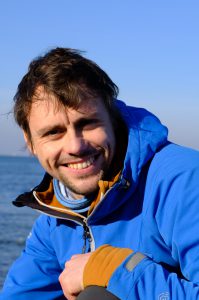 I am a marine eco-physiologist working at Åbo Akademi University in Turku, Finland. I am fascinated by the sea and the interactions species have among each other. I particularly look into the underwater environment with a view for the plentiful scales at which processes occur, from small-scale and short term processes to large-scale and long-term changes.

My current research focuses on the impacts of environmental variability and extreme climatic events, such as marine heatwaves, on benthic marine communities. Here, I have developed novel infrastructure and new approaches addressing the complexity of variable environments in a climate change context. I apply approaches from eco-physiology to testing entire communities in response of multiple and fluctuating climate change drivers.

Within The Sea, a recently launched research profile at Åbo Akademi University, I aim to investigate the role of extreme climatic events within the Archipelago Sea, their perception in society, and measures that may help mediate their negative impacts on the underwater ecosystem.

Background: I received my PhD in Marine Biology in 2012 from Kiel University, Germany, after which I worked as postdoc researcher at Gothenburg University in Sweden. In 2014, I received a Helmholtz postdoc fellowship to work at GEOMAR Helmholtz Centre for Ocean Research Kiel. Following this, I received a researcher position at GEOMAR establishing my own independent research group. I currently hold a position as Associate Prof. of Marine Biology at Åbo Akademi University.

Impact: The output I produce is widely recognized by the scientific community. My research articles are published in high-impact international natural science journals and I am actively spreading my most-recent research results at many renown international conferences. In order to transfer scientific knowledge, I produce material featuring my research (i.e. The Kiel Outdoor Benthocosms)

During my career, I investigated the impacts of multiple climate change drivers on marine benthic systems, applying single-species to community approaches. The field of environmental variability and its significance as amplifier or buffer of climate change impacts is a research line that I followed through these years and that my group and I are developing further. This field also includes the impacts from small- to large-scale environmental variability as well as extreme events (heat waves, freshening events and upwelling) on benthic marine systems. To address this, we are currently evaluating a new model system, a keystone predator system of the common sea star Asterias rubens and its prey, the blue mussel Mytilus edulis.

Over the years, I have also worked on marine fouling, with respect to processes and solutions. Acorn barnacles (multiple life-history stages, multiple drivers, reproduction, acclimation and adaptation) served as model organisms to address a suite of these ecological questions.  Early-on till now, I investigated macrophyte-grazer as well as macrophyte-epibiont interactions. Only recently, I included parasitology of marine invertebrates into my investigations.

Over the past few years, I thoroughly investigated Baltic Sea communities by not only using small-scale microcosms but also by the use of large-scale mesocosm infrastructures. Herein, I thoroughly addressed the consequences from climate change impacts on changes in biodiversity and its consequences for ecosystem function and services via in-situ incubations.